/ PowerMyMac / Tips: How to Close A Frozen Program on Mac

Tips: How to Close A Frozen Program on Mac

Have you ever experienced a frozen program or app on your Mac and could not be closed normally? That’s really nettlesome and annoying because it will not only influence your experience and work but most importantly, your Mac system operation. Any abnormal reaction of a program or app on your Mac will affect the whole system or the other related part. But don’t be so nervous and frustrated, there are many ways on how to close a program on Mac that has no response. Here, we list some useful tips for you to close an unresponsive program on Mac.

Part 1. Is It Safe to Force Quit the Frozen Programs?

Many users think it is harmful to force quit the frozen programs or applications on their Mac, for it is stated that an abnormal close will easily cause a system error. That’s true. Forcing Mac to shut down the frozen application does figure out the problem but may have after-effects. When you close a program in a traditional way, it will remind you to save your work before eliminating everything it runs in the background. However, when you forcibly close it on your Mac, you may lose your files and data, even worse, causing a mess related to this program on the drive.

Anyway, you should first know that forcibly shutting down a frozen application is the same as killing the virus in the initial stage when you get sick. You leave no chance for it to develop. We need to see the great picture and find out the reasons why this situation would happen, and then what should we do to repair it and avoid it from happening again. In that way is your Mac being well protected.

One likely reason for the unresponsive program on your Mac is that you don’t have enough storage-RAM. Many applications operate themselves by producing some temporary files or other folders. If your Mac doesn’t have sufficient memory or is fully stuck by a variety of applications, files, or folders, then when you either try to launch one or more programs at the same time or open multiple websites in a browser, the programs and websites are hard to respond. Or we should say, your Mac has insufficient memory for them to operate their containing files. That’s a similar reason for your Mac’s slow running. Thus, always optimize and clean up your Mac, releasing more space by deleting those unwanted apps or unnecessary files. Here recommends a powerful All-in-one tool-iMyMac PowerMyMac for you to regularly optimize and clean up your Mac. Just a few simple clicks to free up your Mac storage space, protect your privacy as well as speed up your MacBook or iMac.

1. Use A Keyboard Shortcut

Using a keyboard shortcut to force quit is one of the fastest and easiest ways to end up a frozen program, what you should do is:

Tip: Here is a list of keyboard shortcuts on Mac that you can use to improve your work efficiency.

2. Use the Apple Menu

The most conventional and effective way to close an unresponsive application is to go directly to the Apple Menu, what you should do is:

Note: If you have no ideas on which application is frozen, pay attention to the ones that hint “Not Responding”, for this will usually appear next to the frozen apps. 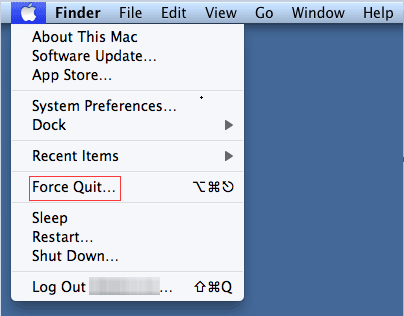 3. Force Closing From the Dock

Another easiest way to shut down a frozen program or application is to close it from the Dock. What you should do is to:

4. Use the Activity Monitor

Activity Monitor is a powerful manner to forcibly close applications, tasks or process that are running on Mac. Through Activity Monitor (shortcut: Ctrl+Alt+Del), you can efficiently and quickly end up those unresponsive programs and applications. What you should do is to:

5. Use the Terminal & Kill Command

If a normal force quit does not work, or you prefer to shut down the app by a command line method, you can try to use the Terminal. What you should do is to:

See! There are several ways for you to resolve the problem. Pick one you like and have a try. But if you do not want your Mac to have such program unresponsive problem, you’d better nip it in the bud-to download a powerful tool like PowerMyMac to help you optimize and clean up your Mac regularly!